First Responders suit up to avoid spread of COVID-19 virus 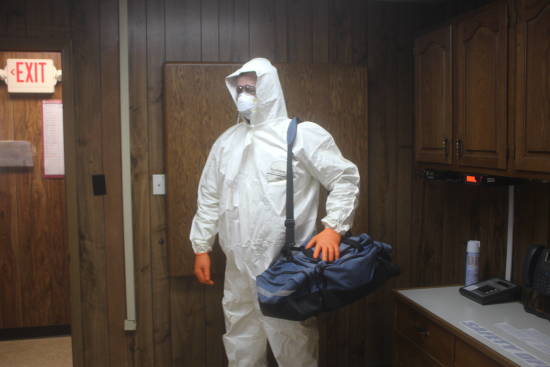 KFD Chief Paul Spain demonstrates the TYVEK protective suits first responders will be wearing when they respond to suspicion of COVID-19 calls.
Photo by Jeff Dorris, staff
Order this photo

Spain continued, “We want to protect our medical first responders. In that regard, dispatch operators are one of the first people that come into contact verbally with the patient.”

Kennett 9-1-1 Communication Supervisor Rachael Bowles informed, “We try to get all the information we can from the first responders. People don’t think about it and when we ask have you had flu-like symptoms in the last 14 days, they may say no, but their aunt who’s living with them most definitely does.” 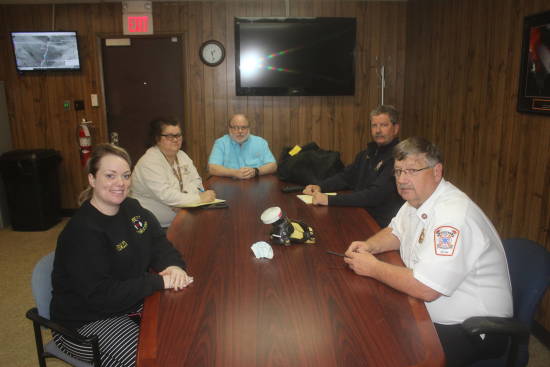 Dunklin County 9-1-1 Communications Lead Dispatcher Jeannie Horton agreed stating, “ One of the things we also ask is have they visited anyone in the hospital? If they have been to a hospital, they may not know what the patient in the room next door, that was coughing and whose door was wide open, was being treated for.”

Horton continued, “We want to make sure that they’ve not had any cases at that hospital and they have not brought the virus home with them when they went to visit their loved one.”

In addition to the usual medical protocol inquiries, 9-1-1 dispatchers will be asking these additional medical questions as well concerning COVID-19.

1. Do you or anyone in your home currently have or have had a fever in the last 14 days?

2. Do you or anyone inside your home currently have or had coughing or difficulty breathing in the last 14 days?

3. Have you or anyone in your home traveled outside of the state in the last 14 days?

5. Are you or anyone in your home currently under a quarantine?

If caller answers yes, the dispatch officer will then follow up with the question, is it self quarantine or medically advised quarantine?

The 9-1-1 Communication Centers have experienced increased calls due to the pandemic.

“So many people have called about state lines being closed or wanting to know if we have a curfew?” shared Bowles. “There are tons of rumors. The big one right now is asking if we’re in lockdown as a city and if the state-lines are actually shut down.”

Horton informed, “What makes it worse with the rumors is social media, with people that aren’t working and they have all this extra time and nothing to do but be on Facebook, so therefore that’s making rumors bigger than what it might have been. They panic because of what they read on social media.”

“We’ll be coming in with masks, gloves, and eye protection,” said Hamlett. “It’s not just going to be walking in in street clothes.”

Spain further explained, “At minimum we’ll come in with our gloves. If they answer yes to any of the questions regarding COVID-19 such as if they’re experiencing flu-like symptoms, our responders will be wearing masks and they will identify themselves as Kennett Fire Department.”

Spain continued, “If there is a high suspicion that they’ve been exposed, out of the country, or in contact with COVID-19 , we will be in a white coverall type suit. It’s called a TYVEK suit.”

Bowles stated, “If they answer yes to any of these questions we are telling the first responders will be dressed in proper protective gear so they’ll be aware of that. That could be unsettling.”

“We’ll send in one individual,” informed Span. “We reduce the amount of fire personnel that are going in to assess. Only one person will be doing the assessment, unless more people are needed inside.”

Hamlett provided, “There could be a situation where a neighbor may see three or four people standing outside dressed in the coverall suits. There’s a reason for it.”

Spain cautioned, “Don’t make an assumption that a person has the COVID-19 virus. That’s just the way we are operating now.”

Bowles shared some of the difficulties 9-1-1 dispatchers are experiencing at this time.

“The barrier that we’re facing now is that people don’t have the money to travel to be able to go to the hospital so the ambulance does receive more calls because of this, in my opinion,” Bowles said.

“People need to remember that they have to help us in order for us to be able to help them,” said Bowles. “Helping us by giving us information, and staying calm with us.”

Horton informed, “Also, while we’re asking questions, help is already on the way while we’re talking to them. We’re doing multiple things at once.”

Hamlett assured the community that these were necessary precautions and not to worry about responder’s appearances.

“Don’t be alarmed with the extra equipment we’re wearing,” said Hamlett. “It’s still the same procedure. We have to be assured that our people are safe. That’s our goal. We are the first line of defense and if something happens to us, it puts the community in that much more worse shape.”

Kennett Mayor Chancellor Wayne summed it up by stating, “Our citizens are well protected and our employees are protected.”

Respond to this story